Well, just up from my third night of sleeping in the barn! Matilda is definitely making progress! The night before last, Matilda couldn’t stand it that she was in the stanchion and couldn’t see the lamb…GREAT SIGN! Her maternal behavior toward the lamb was budding! We couldn’t resist satisfying her urge, so we brought the lamb to her head end so that she could visit. That was it! When we put the lamb back in the pen where it could nurse when it wanted to, she called and called to it. We shut out the lights, hoping to get to sleep, but she only called all the louder! So I moved my bed to her head end and brought the lamb out for it to sleep there. Every time I heard them wake or the lamb cry, I’d bring it around to her udder to nurse. Sometimes I woke to see her actually putting her head gently right on the sleeping lamb.

In the morning we decided to try them together in the stall, with Matilda freed from the stanchion. 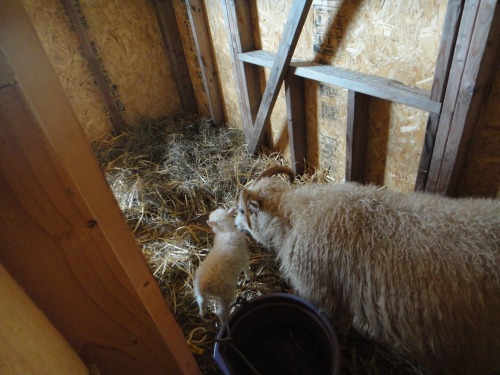 She was a bit nervous, and we were afraid that we jumped the gun, but throughout the day she seemed to get a bit more relaxed, and I thought perhaps I’d be sleeping in my own bed that night…wrong! NOW we had a new problem. She wouldn’t stand still for the lamb to nurse! Apparently this can be common in young ewes.

Our great support group of ISBONA (Icelandic Sheep Breeders of North America) came to the rescue with lots of suggestions. One of them was to check for sharp little incisors poking through the gums which might hurt Matilda when the lamb nursed vigorously (having nursed babies myself, that made COMPLETE sense!) Sure enough, when I went down to take a feel, there were two little sharp areas where those first two incisors were poking through! Now, this is where the solution to this nursing problem in sheep and humans differs! With lambs, you can take a nail file and smooth off those sharp edges! I did my best (the lamb was not happy submitting), then checked the udder for any signs of mastitis (another potential source of pain). We also tried haltering Matilda to try to keep her standing in one place (I really wanted to avoid putting her back in the stanchion!) She took very well to the halter, and so I’ve been haltering her ever since whenever the lamb seemed to want to nurse — that’s what I spent last night doing, too. As the lamb gets stronger and faster and remembers where the udder is (sometimes she looks in the wrong place!), and as Matilda’s hormones kick in, she should do better and better. Already after last night I saw her stand once for the lamb without the halter, and when I do halter her, I try to hold her less and less tightly. Hopefully by days end everyone will get the hang of it!