Stuff happens around here when I’m away.

The other day, when it was 192 degrees outside, and not a breeze was stirring, I ran out to the local grocery store for a quick shop for things for 2nd son’s birthday. I was gone for no more than 2 hours. It’s amazing how much can happen here in 2 hours. When I left, Roy was taking a friend down to show him the old well on our property down past the barn. We’ve been hoping that we could get this well up and running with a hand pump, and we’ve been researching a couple of nice stainless steel pumps. Also, we could see a big ball of dried grass caught on a pipe down there that we couldn’t reach, and we were trying to figure out how to get it out without it going into the water. Perhaps our friend would have some ideas… This old well has a 6 inch casing (the big metal tube that sticks up above the ground), and from it emerges a bundle of wires. Roy and I have been examining it – trying to measure the static water level (technical term for how far down before you hit water). We’ve also determined that, seeing as there are wires coming out of it, somewhere down there there’s a submersible pump. The question in our minds was – do we need to get rid of that pump, and if so, how? 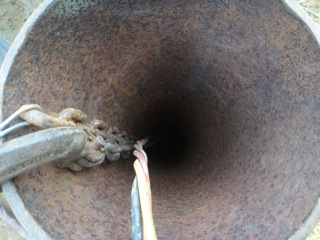 We had called some well drilling companies, but they were too busy to come out and check it. So we started doing some research. The good news was that with the newer hand pumps, the cylinder that goes down to the bottom of the well is very narrow, the idea being that it could pass by the pump apparatus, leaving the pump, etc. undisturbed. It was VERY CLEAR to us that day that the pump DID NOT need to be pulled. We were so happy! We were suddenly thankful that the well guys had been so busy, because it saved us the expense and them the trouble of pulling out the old pump! Make a note of those words above: “VERY CLEAR” and “DID NOT”, because they will play a big role in the next part of the story…

When I returned from shopping, I first noticed that “my” tractor was not in the garage. How did “going down to show him the old well” turn into a need for the tractor? The kids were looking sheepish (no offense to our wooly friends by using that expression!) Roy was walking up from where the well was, and I said something like…”I’m afraid to ask what you guys are doing!” Roy’s smiling response: “Be afraid. Be VERY afraid.” I braced myself. When I got down to the well, here’s the scene I saw. 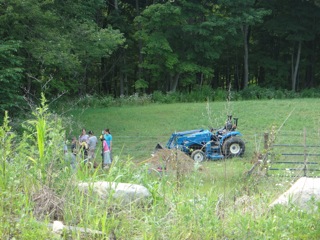 Notice “my” tractor, parked beside a big mound of dirt. This was clearly NOT an exercise in simply “going down to show him the old well”, and I couldn’t imagine how they were using the tractor to get a bit of grass out of there! Something big was going on, and I was planning my approach as to asking what it was as I walked down the hill.

The guys proudly looked up, showing me they had just got a chain around the pipe, ready to pull the submersible pump! They had dug down to the pitless adapter, cut the underground pipe that came out of it, leaving a big hole in the side of the casing into which dirt was falling (subsequently falling into the well water!) Oh yeah – and they had used the shopvac to get the fluff of grass out! (I just found out that that was 2nd youngest son’s idea!)  They were quite chuffed!

They had made a big pile of dirt! 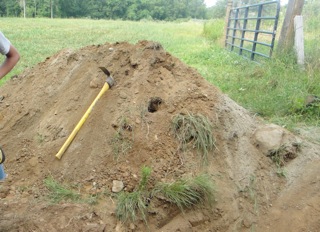 Truly, I would have been so pleased if they had told me that they had just gotten that bit of grass out, and left it at that. But then, for some reason, they decided they HAD to pull out that pump. I think it was some male need to see what was down there – how hard would it be to pull up? What would it look like? There was this sudden need to explore down in this hole. Because the pump COULD be pulled, it now MUST be pulled.

And then I surveyed the scene again,

and slowly said the words that pulled the plug out of their “boys will be boys and must explore” machine.

“Um, Guys, did you forget that the pump we’re buying does NOT require pulling the submersible pump?” “Guys, did you realize it’s 192 degrees out here, and you have fences to build, wood to split, etc., etc.?” They were crestfallen. I tried to backpedal a bit…they looked like sad little puppy dogs who had just chewed my favorite slipper…but something had to be said! “Have you guys ever done this before?! I watched the video! It’s not just a matter of hooking it up to “my” tractor and pulling! There’s gonna be a big long pipe!” Ok – so maybe I DIDN’T backpedal! I just continued to let them have it! After a prolonged look of forlorn on both of their faces, and a bit of guilt on Roy’s as he seemed to suddenly recall that “Oh yeah…we DIDN’T need to pull the pump!” the two of them finally relented, but informed me that they needed to now go to Home Depot to get a plug for the hole created at the site of the pitless adapter. Realizing that their trip to Home Depot would further impede their ability to get things done at the farm, I insisted that I go instead, after receiving instruction of what was needed. Of course that meant that I’d be leaving the two of them alone together, and who knows what they’d get up to next—how big would the NEXT hole be that they dug? I decided it was a risk I had to take. However when I returned they were on their best behavior, and chores were getting done. They were still sorely disappointed that I interrupted their fun, and I was instructed that I should never go grocery shopping so quickly and efficiently again! I got an earful (in a good natured way) about how I ended up also making a mistake — (gee, I really thought I was perfect!). I bought the right plug, but apparently I didn’t buy galvanized, as I had been instructed! Now the plug would only last 100 years instead of 500. Oh well!  (Pun intended.) The end of the story is that we had to admit that it was actually a good thing that they dug down and pulled off that pipe from the pitless adapter and plugged the hole. However it may have been 20 years too late. Our next step with this well, before we spend oodles of money on a hand pump, is to have the water tested. Who knows what has leached into the well through the cut pipe that was connected underground to it! A prayer to St. Isidore that the water is potable for our livestock…Maybe we should have the well blessed!  It will be so convenient to have access to water in this part of our property, not to mention, if we have a power outage, we’d be able to pump up some buckets of water to flush toilets! I’m just waiting for the well people to come on Monday to test the water. I have this haunting thought in the back of my mind that they’re going to tell us to pull up that pump because it’s leaching something into the water, and then the guys will have the last laugh at my expense!