The sheep are in a new pasture this week. Roy has been busy the past few months fencing in an upper and lower barnyard, and the lower is finally complete! Laverne and Shirley, playing queens of the mountain.

It’s a nice rocky place, with a few good pockets of shade from the barn.

I love seeing the sheep standing up on the rocky hills. They seem to be grazing along the road that goes from one side to the other. Millie with her ever watchful eye: 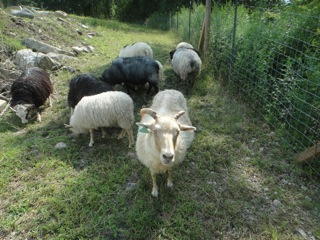 I used to think she was looking out for the safety of the others, but now I’m fairly convinced she’s looking for handouts!

Bruna, who’s taken to being shy as of late: 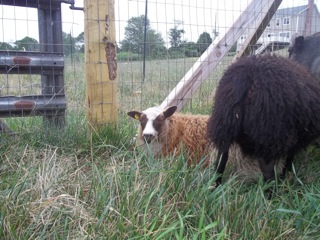 Her brother, who makes up for any amount of shyness she exhibits: 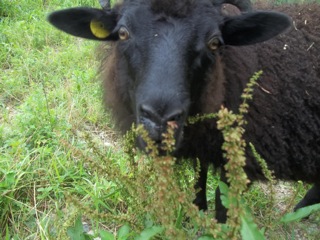 Speaking of close-ups, this is as close as I’ll ever want to be to Monty (unless we’re working with him in the yards!)

Esther, friendly as ever:

Her fleece is still the silkiest.

Grass is always greener on the other side, eh, Laverne? (or should I say the “weeds”?)

Look how big Daisy is! 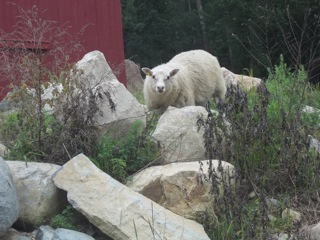 And another thing I’ve been meaning to tell you about. Our sheep regularly seem to segregate themselves! Here’s an example from just this afternoon.
Here’s a photo taken to my right — all the sheep with color: 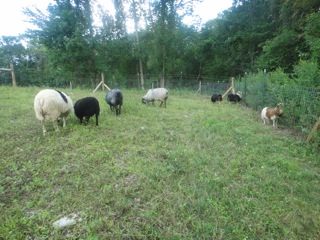 And to my left (I was still standing in the same place!)

We’ve had some awesome skies as of late.  Here’s a slideshow – it looks surreal! 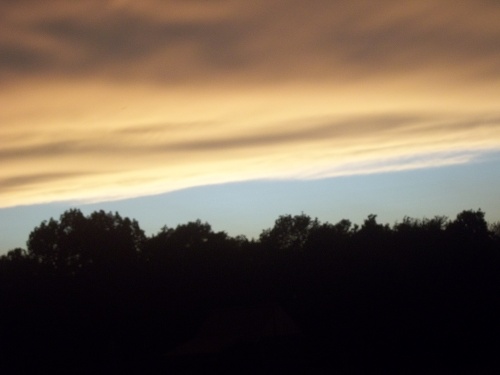 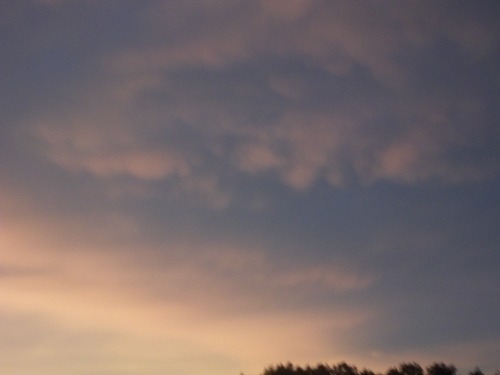 As for what else is going on here…near daily harvesting from the garden…zucchini is slowing down, cukes are peaking, not too many peppers left, carrots, onions and beets are all pulled, beans coming at a nice pace, corn to start being harvested in the next week or so, tomatoes coming slowly (when the rabbits don’t get to them first!), hopefully a cantaloupe within the week (the rabbits got the first one!), winter squash are growing bigger and bigger, tiny watermelons that are inflating daily, last potato harvest in the next few days, sweet potatoes looking healthy.

We’ve added some more critters to the farm, too. Our hens have slowed down laying for the summer, plus they’re a year old now, so we’ve added another flock of 12 Golden Comets (red sex-linked hens, meaning that when they hatch, only the hens are red). They’re about 12 weeks old and aren’t used to free ranging, so they’re quite shy about coming out of their shed!

We’ve also added a new piece of equipment for working with our wool. We’ve been happy with the drop spindles, but have been keeping our eye out for a second hand spinning wheel, and a couple of weeks ago I found a CraigList deal we couldn’t pass up. After a 90 minute drive and $100, we were on our way home with an original Louet S10 wheel – beautiful and in very good condition. We just had to add about $12 worth of parts, and it’s ready to go! In the next few days we’ll wash our first fleece and try carding it and getting it into rolags for spinning! Up until now the girls have been spinning “in the grease”, but it’s time to get brave and try washing some.

We’ve found another shepherdess/spinner in town who is willing to barter for giving us lessons! Can’t beat that!

It feels as if the summer has flown by! We’ll be starting back to school in less than two weeks! With how busy we’ve been lately, I’m wondering how we’ll make the transition, but somehow we always do!

I’ll leave you with a slide show from our non-edible gardens!  Enjoy! 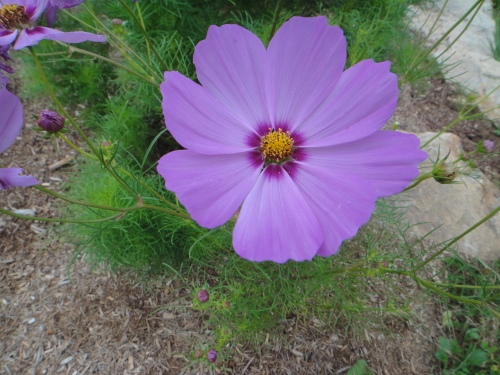 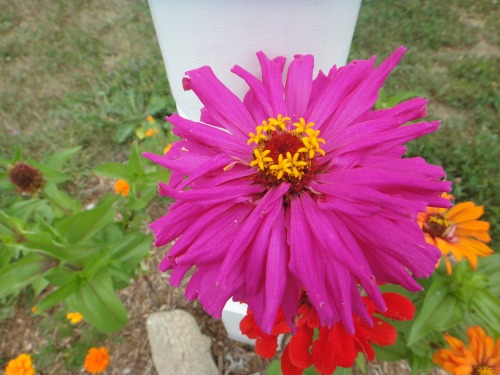 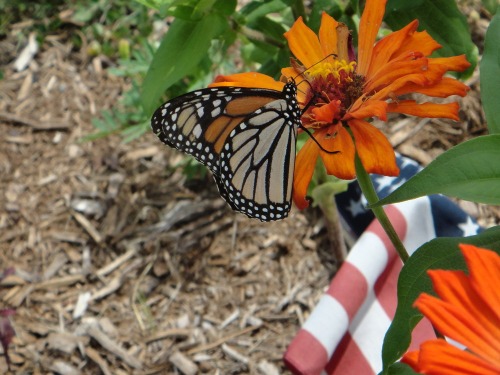