But, why is this little guy now behind bars?

Boomer had a little run-in with the hay feeder!

Yesterday afternoon the kids came up to tell me, “Boomer has a red horn!”

I had a pretty good idea of what might have happened, and I didn’t like the thought of it.

Boomer has gotten himself into trouble too many times.  This time he must have hooked one of his kooky little horns into the mesh fencing that is part of our hay feeder and then pulled so hard to get free that he pulled the outer horn off of the bone beneath.  You can see the offending bit of wire bent out of shape here: 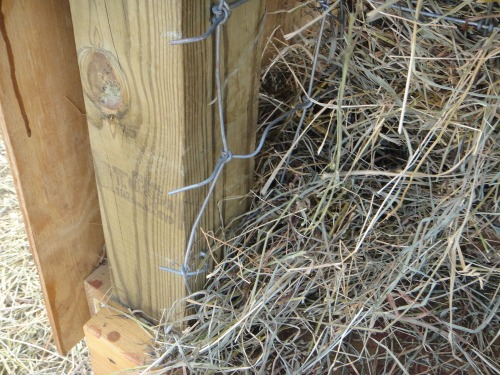 And here’s what I found lying next to the feeder.

Lucky for you I’m sparing you the gorey “before” photo.  But suffice it to say that there were little red drips everywhere that the chickens LOVED pecking at! 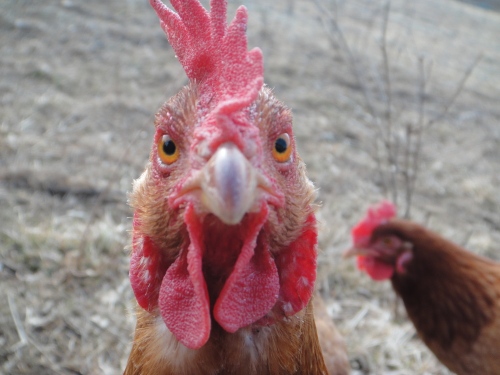 Anyway, the bleeding seemed to be relatively light at that time.  We cleaned him up a bit and put some caustic powder on the horn to try to stop the bleeding altogether but he basically shook it off.  We started him on antibiotics and prayed that it would be looking a whole lot better by today.  We debated somehow bandaging it, but felt it was not really necessary at the time.

So you can imagine how displeased I was to see it even bloodier today because that foolish little ram had somehow banged the end of his horn into something overnight and now the bone was split open at the end.  Now you should REALLY count yourself lucky that I’ve spared you the gorey photos!

This new development definitely merited bandaging.  We pulled the split part back into line with the main horn and stuck in lots of absorbent pads and wrapped him up well.  He now looks like a little goof with a space helmet on, thanks to the duct tape.  WHAT would we do without duct tape??! 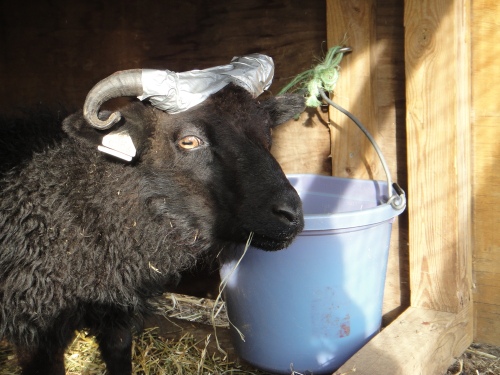 The poor guy is a bit anemic from blood loss.  We’ve dosed him with some iron and B vitamins.  And so that he can get to food and water easily and not have to compete with the other boys, we’ve put him in “lock-up” for a few days.

His old roommates don’t seem to mind his absence at all!