We had an amazingly cold start to January, but things are settling down a bit now and are actually quite unseasonably warm — the big snowstorm is melting away slowly, day by day.  But before it melted, eldest daughter, who got a new camera for Christmas, snapped some photos, trying to capture a cover photo for the Winter newsletter for the Icelandic Sheep Breeders of North America.  If she wins with her photo, it will be her first international magazine cover shot!

Icelandics are made for this weather!  They thrive in it — as long as their hay supply is kept steady, that is!  They do get bored when their pasture is covered.  Even though the grass is no longer growing, they can’t help but graze the overwintering pasture when it’s not covered by snow, just out of habit.

So this is how the day begins — as soon as the sun breaks over the hillside, the sheep are starting to get up and look towards the house, just in case we forgot about them.

Here’s our sunrise view in the morning, from the top of the hill…

And their view from the bottom…

Sometimes even before they have their breakfast, the boys head down to the barn to break open some bales to feed the ewes. 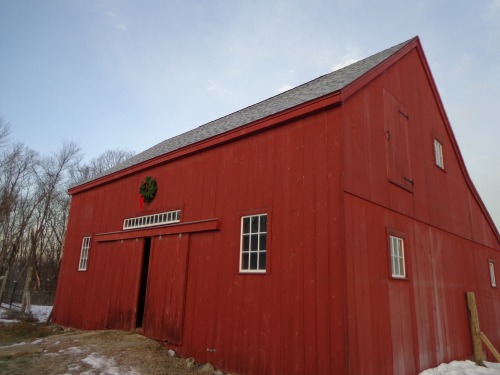 Did I mention how incredibly cold it sometimes is at that hour of the morning, especially when the wind is whipping (and it frequently is!)?  Here’s a frosted fence post as proof….

We now have the sheep divided into 3 groups.

The rams are now separated from the ewes.  That way, should one of the ewes not have been bred when they were all together, she won’t get bred late and give us surprise lambs in June! 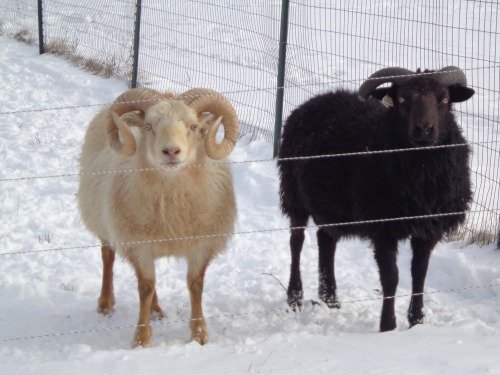 The ewe lambs are separated from the bred adult ewes.  They are basically hanging out for the year, growing and maturing for next breeding season.

The adult ewes, hopefully bred, are the last group.  We need to be careful about their hay consumption — not too little, not too much.  We’re pretty sure we overfed them last year and that’s what caused us to have to pull lambs.  We’re hopeful that scenario won’t repeat itself this year!

They are in the lambing pasture, complete with the small barn that’s divided up into indoor and outdoor pens that turn into our annual maternity ward. 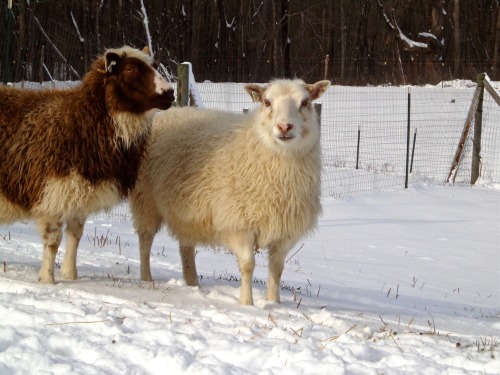 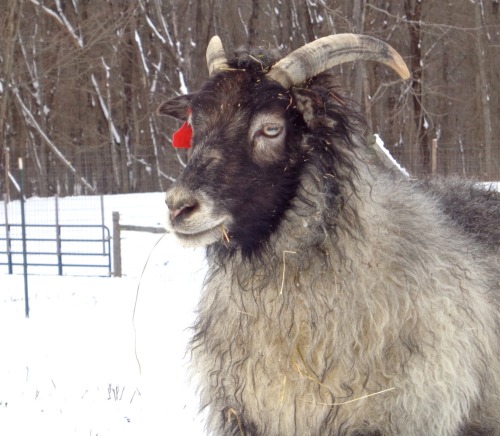 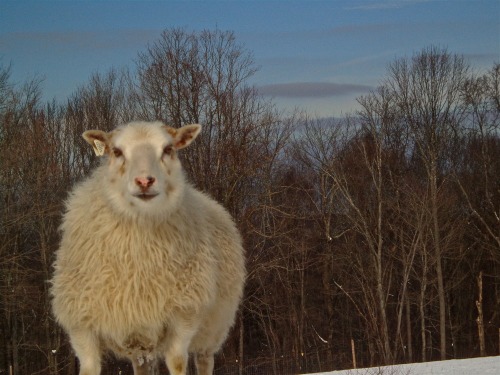 Once satiated, the sheep haven’t much else to do, so after they’ve chewed their morning cuds, they’re ready for a photo op… 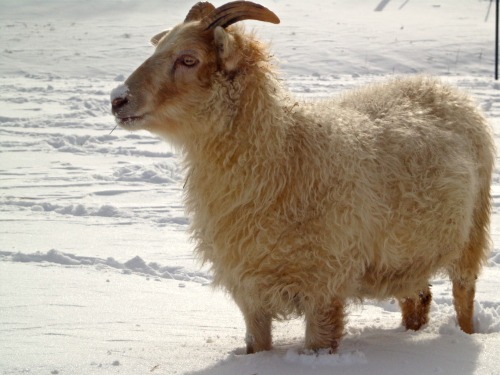 Of course Blue can’t miss out on the fun!

The day ends as cold as it begins… 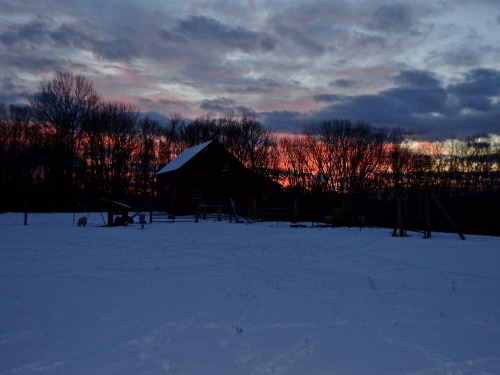 And that’s just a little peek through a barn knothole of winter at Morning Star Meadows!

I’m having way too much fun with the novelty yarn beginner, randomly overspun and underspun single ply yarn that I made in my practice period prior to the 2 ply gray yarn (from Shirley and Molly) that we sold before Christmas.  Novelty yarn is the “in” thing right now, but many who don’t appreciate the random or not so random textural uniqueness of this yarn just call it a product of amateurish spinning.

For me, at least for now, my “novelty yarn” is definitely a product of inexperience.  For someone like Dayna at Madison Wool, novelty yarn takes on a whole new meaning as the creation of a spin artist!  Dayna incorporates things like bits of lace or leather into her yarn and blends colors and textures to a whole new level.

But as I said, my “novelty yarn” is actually “novice yarn”, and I love it just the same!  Spinners have told me how much everyone loves the character of their first hank of yarn.

I was looking for a project for this uneven single ply hank of yarn — something with which to memorialize this early spinning effort.

I met a shepherd at our CT Sheep Breeders Association annual meeting who was wearing a scarf that fit the bill.  I found a pattern on Ravelry for a similar version and then found a person who cheated like I do (!) and created this scarf on a Knifty Knitter loom, complete with a You tube video, and soon got to work! 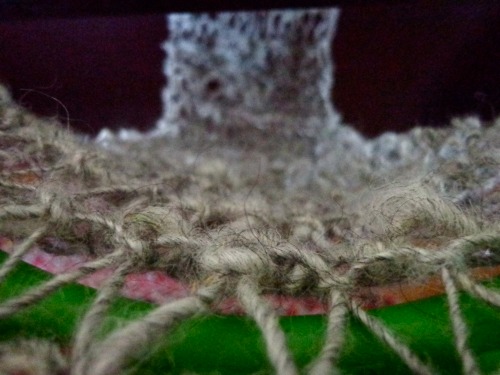 This scarf even has more “mistakes” in it that lend to its beauty – just like my yarn!  The pattern features dropped stitches in between knitting and purling.  Pretty cool effect!  No – this isn’t my “going out to the barn” scarf – it’s definitely more of a “foo foo” scarf.

Several of my friends have, over the years, practically begged me to let them teach me to knit.  I always said I didn’t have the time.  Now I’m carrying this stuff with me everywhere!  It becomes a great conversation piece and I’m meeting so many knitters, one recently even asking if I sold my yarn!  If only they knew what a novice I am!

I know — I’m cheating by using the loom, but for now it’s what works for me.  It is less susceptible to “accidents” — for instance when the youngest child decides to pick up the loom with my knitting and toss it into the air and catch it.  Not something safe to do with knitting needles for him or for my knitting!

The biggest problem so far is that the knitting tool keeps going astray, which has caused me to start knitting with an Allen wrench until the tool can be found again!  Yes, I get that desperate!

It’s so nice to put my spinning to use finally!  And the best thing is that I think I have enough left over to make a second one!  Should keep me busy until lambing season…or maybe not!

A HUGE thank you to Erich and Janice at Steinhagen Pottery for this AWESOME barter for Daisy’s fall fleece!

Erich is wonderful potter, and Janice complements his work with her beautiful personalized artwork called Sgraffito!

Here is the butter keeper they made just for us!

The lid is actually the keeper — the pot holds water that creates the seal to keep the butter from spoiling. 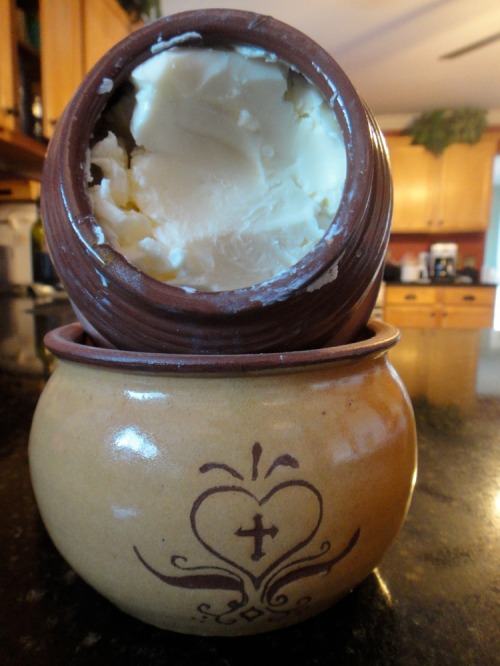 Viola!  Fresh softened butter always ready on our countertop — as long as someone remembers to refill it!