Wow!  How do Roy’s days off become so busy?!

Roy decided to make his 3 day weekend a 4 day weekend and managed to get today off from work.  Of course we know what that means for us…getting caught up on lots of projects before winter sets in and being busier than ever!

We’ve been clearing more of our property for pasture and setting fence posts to eventually fence in another couple of acres of woodland for the sheep.  We’ve left plenty of trees for shade, but took out just enough to open the canopy to allow grass to grow.

It’s been growing like crazy, by the way, and I’ve been asking Roy when we could put some temporary fencing down there to let the sheep graze and help him out by browsing with the weedy overgrowth.

Well, today was the day!

Roy set some fence posts this morning and did some weedwacking along a path so that we could lay temporary electric fence around about an acre of the new pasture.  This afternoon we turned the ewes and lambs out on this new terrain.  The reactions were mixed!

Millie – our most senior ewe (shown above in the header picture for the blog on the far left, checking to make sure all is safe around them) — just couldn’t seem to settle in.  She nibbled here and there, but was clearly undecided as to where she was and where would be her resting spot.  You see, Millie is like a cat  – she likes to find a comfy spot from which to chew her cud and survey everything, but here in the thickets her view was obstructed and there were no real “comfy spots” to be found – at least not initially!

For the most part, the others all got started nibbling at this and that.  Some decided to stay along the road and eat the grass.  Others ventured into the thicker weeds, jumping off rocks and little hills, clearly enjoying their new digs!

Lisa’s eating the tall grass like mouthfuls of spaghetti! 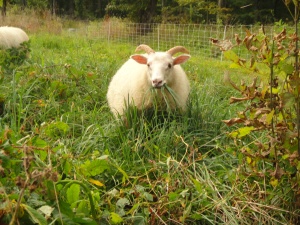 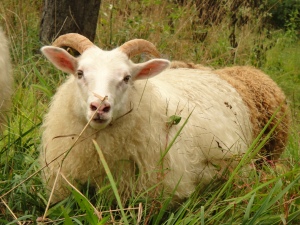 Meahwhile, back to our normal end of the week chores…I headed up to the hen house to do the weekly cleaning.  I grabbed the wheelbarrow and a pitchfork and started to open the gate, when I heard a huge kerfuffle of angry hens and notice a lot of flapping near their house!  I looked over to see lots of chickens flying around…and then I saw why!  Trying desperately to grab one of them was a red tailed hawk!  I was only about 10 feet away from him/her and I was so glad I was!  I dropped the pitchfork and grabbed my hat and starting waving it and screaming for it to go away!  I’m sure the neighbors were wondering who I was yelling at!

Thankfully chickens are really not that dumb.  Their collective fluttering and smart move to go under the henhouse seemed to preserve their life this time – along with my yelling, I guess!  That hawk finally gave up and flew up to the peak of the roof of our house.  Maybe he/she hadn’t completely given up.  But I stood my ground, hands on hips, and stared him down until he took to flight once more – breezing by us as if to say, “I’ll be back!”  He then headed off to the woods.  It must have been 20 minutes until those hens came back out from under the hen house, by the way!

Our evening was probably the most interesting, though.  It was time to bring the ewes and lambs back to their home pasture for the night.  The fencing there is permanent – much more secure for them to stay in all night AND for potential predators to stay OUT!  Roy and I headed down around 7:30, as dusk was fast falling.  We hoped that the ewes would have brought their lambs close to the gate, ready to go “home” for the night, but unfortunately there were only 11 of the 18 there ready and waiting.  If there’s anything we’ve learned as shepherds, it’s that you don’t try to move part of a flock without the other part.  It just doesn’t usually work in the long run…and long run is what we had.  We needed to move the sheep through 3 gates to their home pasture, which meant through a couple of other pastures that of course they wanted to visit…but I’m getting ahead of myself.  First we needed to join the other 7 with the flock.  Question was, where were they?

I walked to the far end of their new area, and there, up near the fence, were the other 7.  They had gotten themselves into a thick area from which there was basically only one way out, and with dusk falling, they really weren’t finding that way out on their own!  And of course by now the other 11 have followed me (it was so cute!  I wish I had a camera!) to the other end of the field, so now we not only had to flush the 7 out from their predicament, but also join them to the 11 and drive them all to the exit gate which they had only just went through for the first time today.  Suffice it to say, it took a bit of running around, but eventually we got them all going in the right direction and drove them home before it was completely dark out there!  Here’s hoping that tomorrow goes a little easier!

And so summer unofficially comes to a close this weekend.  The barn swallows have already left us.  The days are getting shorter and shorter.  The lambs are getting bigger and bigger, and many have been presold already, and many have totally endeared themselves to us.

The weekend has only just begun!  What other adventures await us over the next few days?!