Hey, girls!  Look at my new sweater!  I got it for Christmas! 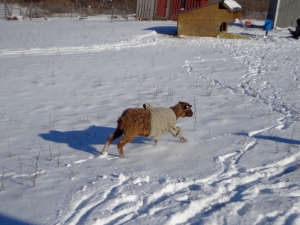 Millie, have you ever seen a more ridiculous looking thing? 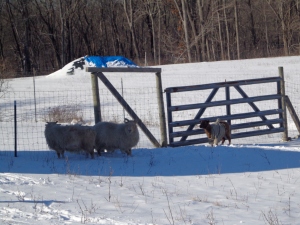 I know, Fatima.  My daughter, the fashionista!  Not! 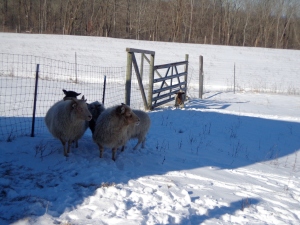 Oh look, she’s coming over to show us.

Why can’t she just sport a nice crisp white fleece like her sister, Missy? 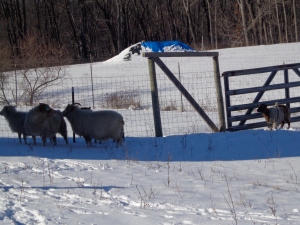 Hey girls!  Wait up so I can show you!

Momma, you’ll love it!  It’s even made of wool! 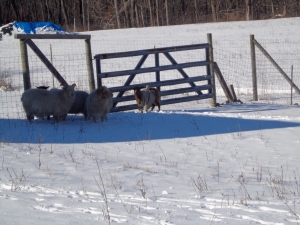 How come you keep going further away?

Was it something I said?!

Chesta!  Come back and see me! 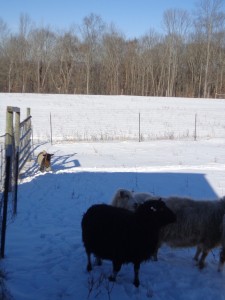 Oh brother!  Now she wants ME to say something nice about her sweater!

It’s not even her color! 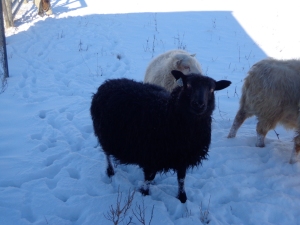 So girls, what do you think? 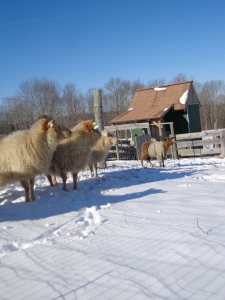 I can’t even bear to look at your sister, Missy!

Fatima, you go over and say something nice to her! 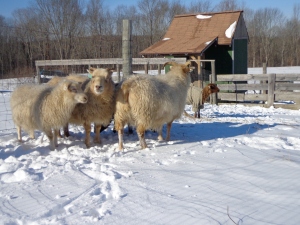 Quite becoming! (not sure WHAT you’re becoming, though!)

Say – why don’t you go and hang out with the chickens or something? 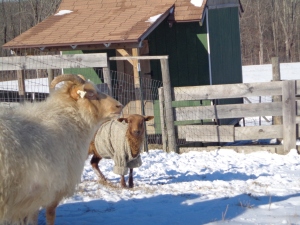 Girls, you KNOW we can’t be seen with her looking like that!  What will the rams think?! 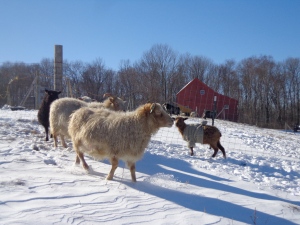 Hey!  Wait up!  Can’t I just hang out with you at the mall this afternoon?  PLEASE?!

Why are you running away? 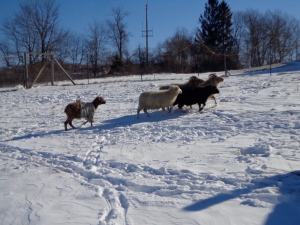 I love anthromorphizing animals!  Too much fun.

But on a more serious note, we are actually just happy to still have Guadalupe with us right now.  She’s been through a lot lately.

For some reason, this little girl became deficient in a trace mineral that is essential to ruminant health – cobalt.

Late last summer we noticed Guadalupe hanging out at our mineral feeder most of the day.  She’d graze with the others, but we rarely saw her lie down and chew her cud with them.  You could just tell that something wasn’t right about her.  I figured that if she needed minerals, she’d just eat what she needed and be ok. I assumed I had a pretty rationed balance of what she and the others needed in their free choice loose mineral mix which we had tweaked for the breed and our area.  What we didn’t realize, though, was that our soil in the northeast is deficient in cobalt.

Of course we didn’t know there was something more seriously wrong until about a month and a half ago.  She started to drop weight and  continued to be a “loose mineral addict.”  It seemed for a while that it was all she focused on.  Her appetite was poor – when she did eat, she lacked enthusiasm and ate slowly.  She was sluggish and shivered and from time to time had an eye discharge.

I knew that at that rate she could never be eating enough just to keep up with the onslaught of cold weather.  Hence the failed attempt at giving her extra insulation with a child’s wool sweater!  As you can see from the photos, her new Christmas sweater resulted in complete rejection by the flock!  Doesn’t help that the sweater previously warmed our dog, so now poor Guadalupe smelled to everyone like a predator!

I started to supplement her diet immediately with whole corn, starting slowly so it would not make her sick since she isn’t used to eating grains.  She ate some – I knew it was enough that we should start to see her at least gain a little weight.  At the time we first weighed her she was just over 40 pounds.  I think our dog weighed more than she did!

I began to ask around to our wonderful Icelandic breeders across the country who participate in a yahoo group that is priceless to us!  Though we are both veterinarians, we say it time and time again that we are learning more practical information about sheep from these people than we ever did in vet school!  Many of these shepherds and shepherdesses really know a thing or two about minerals – either from their own experiences or from book learning or both.  I had been putting together the mineral addiction with the symptoms and started looking at B vitamins.  Many in the yahoo group had similar thoughts.

One neurologic disease of sheep is brought on by a B vitamin deficiency (thiamine).  But her symptoms didn’t quite fit that disease.  Since it can’t hurt to give a shot of B vitamins, we tried it in addition to the feed supplementation to see if there was a response.  We gave a B complex injection, and saw some improvement.  She gained over 5 pounds over the next week or so and seemed more lively.

By this time we were trying to focus in on which B vitamin she was lacking.  I was getting more information from other shepherds who suggested that it was possibly a bit more complex than simply lacking a vitamin.  It was then that I started reading about the mineral cobalt.  Though only a trace mineral in the diet, it is essential for ruminants for digestion, wool/hair growth, and healthy blood cells.

Symptoms of cobalt deficiency include poor growth, failure to thrive, short wool coat, eye discharge, etc.  So why her and not the others?  These are the questions we’ll never have answers to, probably!  But another shepherd confirmed that she has had this in the occasional lamb for whatever reason – a greater need for cobalt – usually becoming obvious in late summer after weaning.

So how does cobalt affect so many processes in the body?  And, more importantly, what do we do to get this little girl to thrive again?

Her main problem was nutritional.  Cobalt is used to make vitamin B 12 – cyanocobalamin.  This vitamin is made by and used by the bacteria in the digestive system.  Without cobalt the bacteria can’t do their job digesting all of the fiber in her diet.

We started dosing her with straight Vitamin B12 a few days ago and the results have been amazing!

She is playful and her appetite is normal.  I had forgotten what a delightful lamb she is!  I’m totallly attached to her now, having been hand feeding her 3 times a day for the past month and a half!  And best of all – in the past two weeks she’s gained 8 pounds!  She’s up to a whopping 55 pounds!

Since this is all a bit of an experiment for us, I can’t predict if she will continue to thrive.  The biggest issue now is – what set this off?  Does she still need more cobalt?  Have we just given her a temporary fix with the B12 injection?

To set our mind a bit more at ease, we’ve ordered slow release cobalt capsules that we’ll be giving her as soon as they arrive from California early next week.  It’s difficult to get loose cobalt locally to put in their minerals, and even if we could we couldn’t force her to eat it.  But by placing a bolus down her throat we’ll feel a bit better that we’re at least providing a source for her.  We’ll see how she responds, but I’m very encouraged by her improvement this week!  And the big question is, will this be a lifelong problem, or will it be less of a problem when she stops growing?

Sometimes all of this time spent caring for a farm animal seems a bit crazy, but our “farm animals” are also our pets, and we always want to give them a fighting chance!

Of course we know we won’t always win these fights for life – and of course in the process we only get more attached to the weak ones whom we sometimes in turn have to part with early, but such is the life of a shepherd.

And that’s the life for me!