Well, when we left you last week, we were lamenting the fact that our pastures were dotted with poisonous hemp dogbane.  So you can imagine our surprise when we arrived for the talk we most eagerly awaited at the Mother Earth News Fair last weekend and heard, before the talk began, one of the speakers quietly talking about dogbane to the person sitting in front of us!  We were all ears, trying to listen to their conversation, dying to interrupt and say, “We have dogbane!  What can we do about it before our sheep arrive?!  Surely they will all eat it and die!”  And then we heard music to our ears.  Apparently Penn State issued a bulletin last year saying that dogbane is not as toxic as it was once believed to be – that apparently someone mistook it years and years ago for the highly toxic plant (that doesn’t even grow in PA as far as we know!) oleander, and its bad reputation stuck, and that was that!

Previous agricultural publications about hemp dogbane made it a serious “bad guy” for your pastures, advising farmers to spray broadleaf weed killers of various types liberally and often to destroy this weed wherever it was growing.  This was a big oopsie for the extension service!

Our speakers, Shawn and Beth Dougherty, were surprised to find out that hemp dogbane was declared to be so toxic, considering their mob-grazed Dexter cattle had been eating it for years with no ill effect.  They then discovered this 2016 bulletin, and things began to make sense again.  Now here’s the kicker.  Beth and Shawn quote the bulletin on their blog, and others quote from it on forums online, but click the link they provide on their blog, that was active at the time they included it, and you get a website for Penn State Extension service that no longer has a TRACE of information about dogbane on it!  We are not sure of the cause of that article’s disappearance from the web, but that being said, I am waiting to hear from Beth who intends to speak with her contacts at Penn State to get to the bottom of this mystery!

So we started off our time with the Dougherty’s on the right foot!  We were so happy that we now wouldn’t have to hire in a weed spraying company to search out and destroy all of the dogbane, of course taking with it innocent broadleaf weeds that would be excellent fodder for our sheep.  The pollinators on our property will be happy, too, as dogbane is a favorite of theirs!  By the end of our time with the Dougherty’s we found out that not only did we have the same farming practice beliefs in common, but we also have the same number of children and the same Christian beliefs!  Of COURSE we bought their new book!

Take home points for us from the Dougherty’s talk on intensive rotational grazing were mostly confirming our desire to mob graze our sheep, stockpile pasture, and to now worry less about the weeds and pastures!  We learned that by intensively grazing the sheep, we will heal and improve the pastures.  We also learned more about making use of springs and seepage on our land to provide water for the animals.  By their 20 plus years of experience shared in the talk and in their book, we can hopefully get a jump start on things here and avoid mistakes that would otherwise slow us down!

We also attended talks on the farm business side of things.  A very good attorney from the Farm to Consumer Legal Defense Fund gave excellent advice on what we will need to know to start a farm business here in PA.  Hers seems like an excellent and necessary organization to be part of in these days where small farmers and businesses are under incredible pressure and scrutiny by the state and federal government.

Later in the week we attended a “pasture walk” at a local cattle farm that also practices mob grazing with their Red Devon cattle.  They, too, have been practicing this intensive rotational grazing for 20 plus years, and have converted a conventionally farmed property into lush and healthy pastures with beautiful healthy animals!

We feel so blessed that we have been able to learn from these farmers’ years of experience.  The results of their “experiments” with this relatively new way to graze ruminants (compared with simply grazing the cattle out in a big pasture with little or no rotation), is further support for us to use mob grazing with our future sheep flock!

So what does all of this mean at this stage of the game?  We don’t even have any livestock!  Now that the power company has mapped out the underground electric cables running through the front yard, Roy took time to put up snow marker posts around the homestead to mark where our fence posts will go. 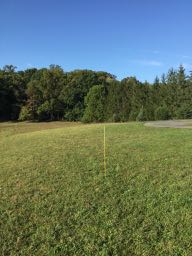 He’s also drawn a diagram of the property, roughly noting location of the fence lines that will eventually go up to provide the easiest way to break up our land into many small grazing strips.  The “spokes” of the wheel will be further divided across from side to side into grazing strips with temporary electric fencing.  Gates will be strategically located for access to pastures from the homestead and from points around the perimeter of the property.

Each grazing strip will provide a day of grazing for the “mob.”

Today while Roy took the family to a hunter safety course, I was able to mow the one mile perimeter of the property.  Blue and I took a stroll around on the newly mown path after that, and when Roy got home we did our own Morning Star Meadows pasture walk!  Luckily we didn’t encounter the bear we were warned about!  We are really getting a feel for the lay of the land, the predominant pasture growth on various parts of the property, the patches of plants indicating potential for springs and seepage, and just overall how great the meadows of Morning Star Meadows really are!  And now we know how much greater they can become as we begin to care for them!

I think I’ve kept you long enough for this week!  Let the fence building begin!