Our second year of having a hay covered garden, and we couldn’t be happier!

Last year we worked the hay in around the plants, but this year we are working the plants into the hay.  There is a bit of initial sweat labor invested in preparing the rows, but we have decided it’s well worth it, to avoid watering and weeding later this year.

We first push the hay away from the area we want to plant.  This can be done in spots for each individual plant, but we have decided to clear entire rows.  It’s so wet and wormy under each row, that it helped that we let the area dry out a little overnight before working the soil.

Roy then took the Mantis tiller down the row.

For our peas earlier this spring we simply pressed them into the wet soil after hoeing it up a little, and it actually worked out quite well!  Here they are:

After Roy tilled the row, I was able to easily plant our cucumber seedlings.  We then gently worked the hay back over the row and carefully mulched each plant with the more decomposed and wet hay from the bottom of the hay that’s been on all winter.  Praying for no late frosts this year!!

Below are our potatoes.  The first picture shows them covered.  We planted these a few days ago.  The second picture shows the uncovered potato.  They will grow under this hay as if they were under a few inches of soil.  As they grow, we will cover them with more hay, similar to “hilling” done with soil – and a lot easier!

Our little garden is doing great.  Here you see the onions doing nicely, and the garlic well on its way.  We’ll be looking for garlic scapes before you know it!

We’re hoping to be harvesting this spring mix lettuce after our daughter’s wedding later this month! 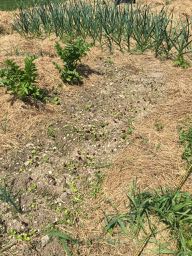 Here are our early plantings of beets, carrots, chard and kohlrabi.  As the plants get larger, we’ll be able to mulch them better.

Another success story is our rhubarb!   Fertilized with compost early this spring as they were just emerging, they have really taken off, and the deep hay around them has prevented the multitude of weeds we had last year!

Hope you get to try this method of gardening too!

Ugh!  I feel so guilty that we have not blogged for such a long time – like maybe all of winter?  But life on the farm truly does slow down from a farming point of view in those winter months.

With all that lack of activity, Roy and I finally bit the bullet and joined a gym to keep us moving through the slow winter months.  Between that and the day to day activities of raising our large family, we have been kept busy for sure – but nothing really farm-blogworthy!

We have started gardening – some indoor and some outdoor.

Our garlic from last fall has done quite well.  Our parsnips survived the winter and are providing us with a sweet spring harvest!  Onion sets are planted, and after the proverbial onion snow, have started to truly take off!

Early spring plantings of lettuce, carrots, chard, beets and kohlrabi are all in the small garden.

Last year’s compost has beautifully fertilized our rhubarb.  Planted from transplants from a friend’s heirloom patch, they are truly thriving here this year and have already budded flowers which we quickly removed to allow more energy to the stems and leaves.  Hopefully we’ll be harvesting when the strawberries are ready – they are already flowering!

We have already sampled the sprouting asparagus.  It will be a while before we harvest enough that there is some to bring up to the house.  For now it provides a wonderful snack while we’re planting!

Squash seeds have been started indoors and have exceeded our expectations — like, they are going so crazy in here that I’m afraid they’re going to have to go in the ground before I’m ready to put them there!  Hopefully there will be no late frosts!  Cucumbers, spaghetti squash, butternut, and zucchini are all  thriving, as are the watermelon!

Sun flowers were to be started today, but met with a sad fate.  Happy daughters ventured out in the fleeting sunshine today to fill cell pots with potting soil, and while turned to work on that, Mr. Finnley stole the seeds and quickly ingested the lot of them!  Guess the girls will learn a lesson.  The less couthe boys started to wonder if the seeds might sprout better in Finnley’s, ahem, “fertilizer”!

And now to why I sat down to write today before heading out to mow the lawn.  Our Ruth Stout garden practices seem to be quite successful!  Last year we mulched around all of the plants with a very thick layer of old hay from the old barn across the street.  It was a wonderful summer with little to no weeding and no watering except for newly emerging seedlings!

At the end of the growing season, we blanketed the whole garden (except the strawberries) with a thick layer of hay.  We even unrolled round bales and added old hay from the sheep’s leavings, complete with their manure.  A couple of weeks ago we opened up a row to put peas in.  I kid you not – every handful of soil beneath that composting hay was filled with 5 to 10 worms -red wigglers, nightcrawlers – TONS of worms!  THAT is how I measure the success of the Ruth Stout method!  The soil was cold and wet and rather clumpy when we tried to till it.  It was a mucky job, but we ended up getting the peas in – either pushed into the soil or covered with 1 1/2 inches of clumpy muck.  We waited to see what would happen, and happily they have sprouted!  Yesterday we planted the remaining peas.  This time we decided not to till – just to push them into the soil.  When these get tall enough, we’ll push the hay back around them!

One of the things Ruth Stout did that both impressed and intrigued us was to plant her potatoes with no tilling or soil handling whatsover.  Her book was written many years ago, so I thought by now there would be plenty of gardeners out there who have tried her technique.  We watched this video (they have quite a few wonderful instructional videos, by the way) and were convinced it was worth trying.  Ruth said that she simply put the potatoes on the ground and covered them with straw or compost of some sort – enough to cover them from sunlight.  We had quite a few sprouted potatoes left over from last year, and they are now nestled under the hay.  When they begin to rise through the hay, we will “hill” them with more hay!  When we want to check how they’re doing, we just lift the hay and peek – and even sneek a new potato or two if we wish!

Enough for now.  Time to mow.  Pennsylvania is so beautiful during the springtime – partly because of the lush green pastures!  The sheep will mow their part – and I’ll mow mine!