For those who follow this blog, you may remember an ill-fated attempt to capture water from the roof of the house to water the garden. Below is the photograph of the IBC (Intermediate Bulk Container), which collapsed under the weight of the water we collected (an IBC can hold 275 gallons which at 8 lb a gallon for water is over a ton!). Apparently the metal frame surrounding an IBC (absent from this one which we found laying around on the property) is more than just decoration and is critical to maintain structural integrity!

Below is the finalized construction of our latest attempt to collect water from the metal roof of the barn for the sheep. It looks complicated, but the concept is quite simple and I will describe the reason for each component. Note the metal framed IBC which we bought to replace the collapsed one with no frame!

Firstly, we had to position the IBC around the corner from the downspout because that side of the barn has quite a steep slope on which it would be very difficult to position the container without digging a significant foundation. This apparently small concession to gravity necessitated using expandable, flexible pipe to pass around the corner. The next issue was that the downspout measured 2×3 inches, which is smaller than most house gutter downspouts which measure 3×4 inches. The importance of this will become clear with the next photo. But suffice it to say that we had to pass from a smaller to a larger opening. Also, we wanted to install an easily cleanable filter at a couple of points and this created an opportunity to place one between the white and brown components. The joint is supported by a metal brace, and there are wires holding it together that are loose enough to easily remove to access the filter. But why have that smaller 1 inch pipe from the side of the brown downspout?

The image below shows the reason for this interesting structure. At the opening of the 3×5 inch brown pipe is a close-fitting rubber trough with a hole through the middle. Water passing through the downspout fills the trough and exits into the small round flexible pipe that we plumbed into the center of the green lid on the IBC. The reason for the central hole is that if the IBC is filled or there is a blockage of the pipe, the water can pass through the hole and not back-up onto the roof causing leaks. The block of wood is the same thickness as the metal frame, ensuring that the trough remains horizontal and the hole stays open underneath. The slight lack of efficiency of water collection (with some water falling through the hole missing the trough) is outweighed by the peace of mind resulting from knowing that the aparatus will not cause problems upstream! This very useful aparatus (including the pipes and drill jigs to place the rubber insert into downspouts) is available from stores such as Home Depot, or can be obtained on-line. Note that this is made only for a 3×4 inch downspout, thus creating our need to expand our fitting from the original 2×3 inch downspout. Dontcha just love plumbing incompatibility issues!?

Another view from a different angle below. Note the frayed white edges of a second filter we inserted at the beginning of the flexible black pipe. The two filters are cleaned by simply removing them and shaking them out whenever we use the water to fill secondary containers to transport water to the sheep or chickens.

Finally, after a good rain, we have collected about 100 gallons of water! All we do now is attach a hose to the IBC outlet at the bottom and let gravity fill a 55 gallon drum, plumbed with a faucet and hose that we strapped into the back of the Kawasaki mule side-by-side that we can drive into the fields to fill water troughs and buckets! Note that this is from just one corner of the barn We can do the same thing to each corner downspout, potentially quadrupling our capture of life-giving water!

As we increase our flock this will become really important, since sheep will drink up to 2-3 gallons of water a day in the summer. For 150 sheep (including lambs) that adds up to almost 500 gallons a day, an amount that our house well may not be able to produce. 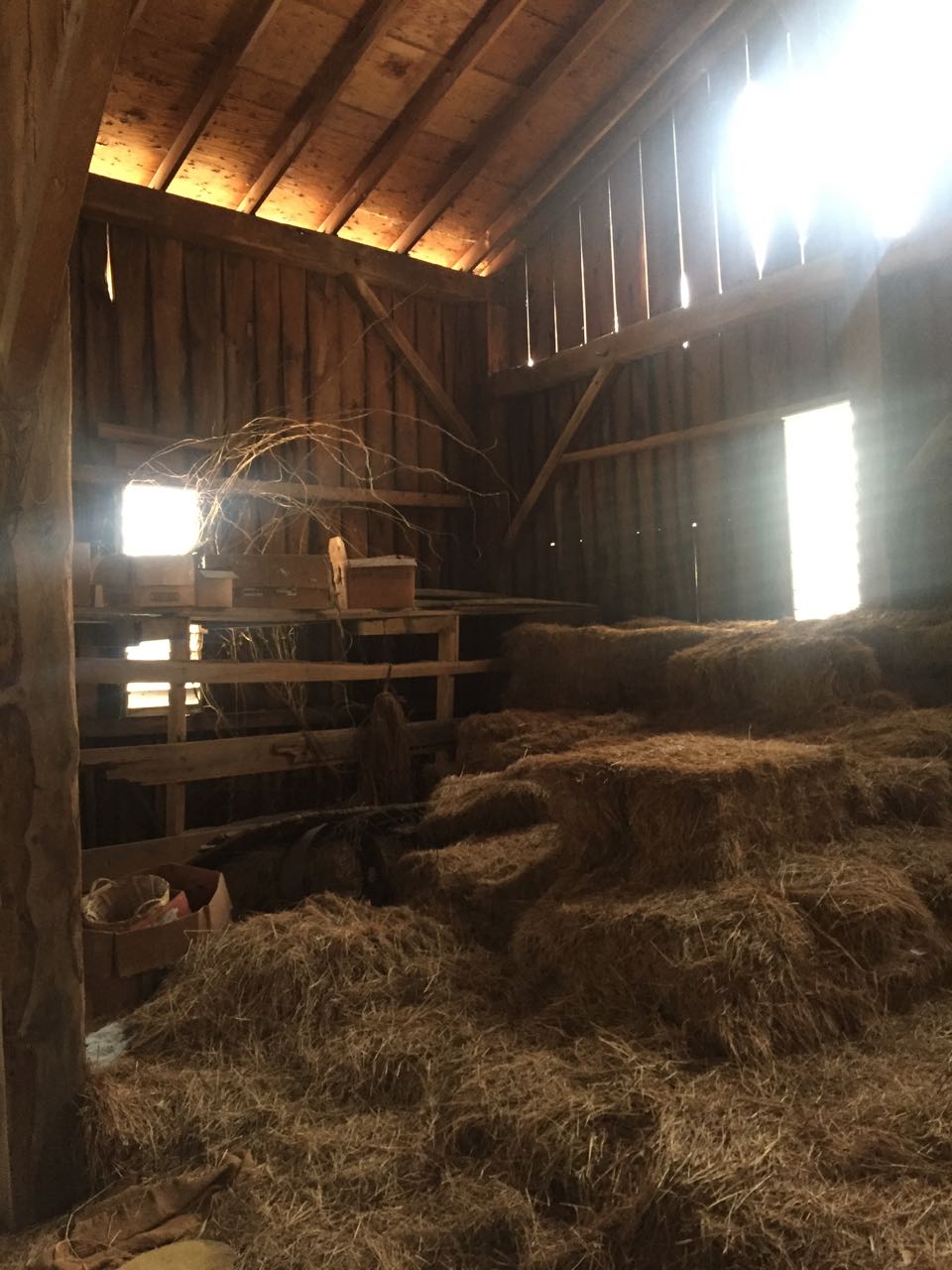 Ever thought about what you can do with old moldy hay smelling of cat urine and and laced with raccoon poop,  apart from condemming it to a compost pile or bonfire, that is?  If so, then read on.  If not, read on anyway.  The information may come in handy some time in the future!  The story unfolds oddly and interestingly, as stories from real life often do, which is why fake stories from Hollywood or books have to revert to shallow and fetid tales of imorality to hold viewers attention.

Our cousins from New Jersey recently bought the abandoned farm across the road.  On the property is a large barn built in the mid 1800s.  Part of the detritus of 150 years of living scattered throughout the structure includes a few hundred bales of very old hay–at least 8 years old, as that is the last anyone lived there.  But it is likely that it is much older than that, although it must have been collected since automated, machine baling started using sissal twine to hold the bales together.

We were pondering the very significant effort needed to control weed growth at the same time as we were lamenting the clay content of the soil here and how hard the soil compacts when it is walked on.  Somehow weeds can grow in this soil, but weeding implements have a really hard time penetrating the baked pottery passing for soil in much of the garden.  We had additionally decided that we needed to significantly increase the organic matter in the soil.  Previously, we had used the composted manure and hay from our winter sheep feeding, as well as broiler chicken offal and anything else that acumulates on a farm.  But since we are just beginning here, we don’t have anything accumulated for such a purpose.

We had used some of this hay to cover the grass seed we spread after the earth moving had denuded a large area around the new barn.  Robin made the creative leap to using this hay to mulch the garden, and at the same time helping to clear out the old barn for our cousins.  So we piled up 10 bales in the back of the UTV and trucked it across the road to our farm.  Now to properly mulch, you have to use a very thick layer of hay, and we had no idea how much we would need until we started.  Some 40 bales later we were done — exhausted, but done.  Now, in addition to helping with weed control, a thick cover of organic material will importantly promote retention of moisture, while slowly composting into the soil.  We are using water accumulated from our roof in a large plastic cistern (see previous blog entry) for the garden and it is both time intensive and physically demanding to apply it to the large garden, so reducing the amount of time and effort spent watering is another great advantage of mulching.

Below you can see the piles around the blueberry plants.

Below is the view of about half the garden giving an impression of the thick coating of old hay with the plants peeping up from their cozy beds.  The strawberry plants are in the foreground. 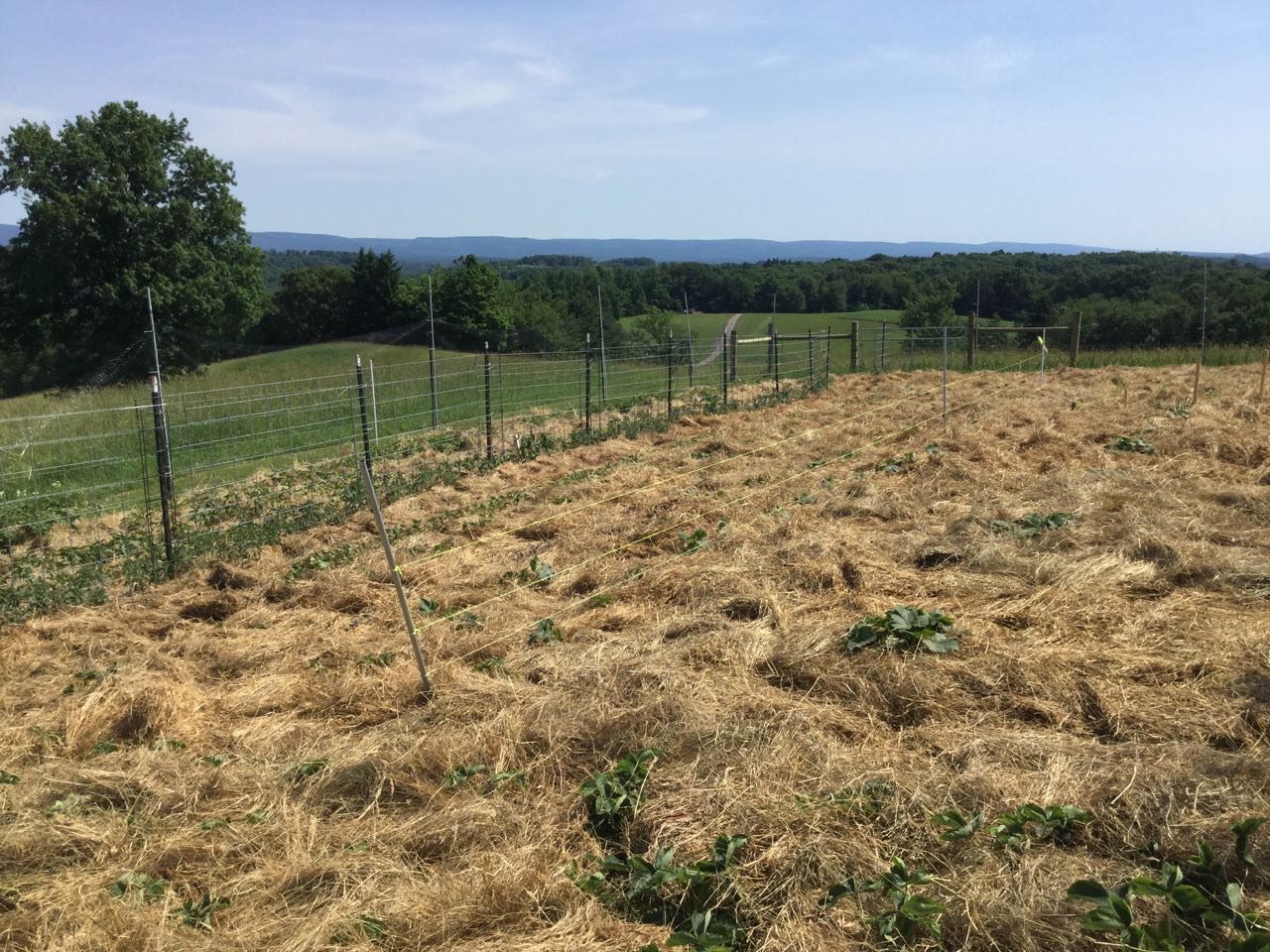 This is the view facing the other direction from the center.  In the foreground you can see the buternut squash, then cucumbers, zucchini, tomatoes (adjacent to the cattle panels), and potatoes with white flowers on top in the background, maybe 75 feet back.

A close up of the butternut squash ensconced snugly in about 3-4 inches of compacted hay (we layed down the hay in  flakes from each bale that you can almost visualize in this photo.)  Any weeds poking up from this probably deserve to live!

So with all this old and apparently worthless hay, we have:  increased our organic matter in the garden, as this composting hay will be tilled in next year; conserved moisture and thereby our precious water resource, as well as our backs; and finally, hopefully reduced our weeding to almost zero (of course that’s not saying a hay seed or two might resurrect after all these years and sprout, but then we’ll just cover it with more hay!)  Isn’t nature (by which I mean God!) wonderful when you decide to work with it rather than try to beat it!