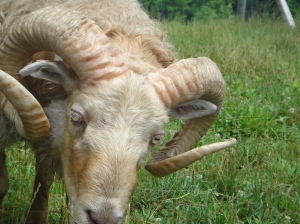 Drover is by Clancy out of  Millie.
Clancy was a Jager farm ram out of AI parents.  He was a quick grower with a nice, wide set of horns (homozygous), and carried solid and moorit genes.
Millie is a Solee daughter.  She has had incredible parasite resilience this summer and has excellent maternal qualities, as did her mother.
Drover is a solid and stately looking ram with plenty of spunk.  He has a wide and solid set of genetically homozygous horns, which he is proudly showing off in the photo above.  We are happy to have Drover as a replacement to his much loved and respected sire, Clancy.  Drover has had excellent parasite resistance and has needed no deworming this season or last.
Drover sired beautiful white, horned twins – a white ewe and ram – with Roxanne this past 2011-2012 breeding season and again in 2012/2013.   Solee was grandmother to both Roxanne and Drover, and we wished to bring more of Solee’s excellent genetic material into the flock through this breeding.  He sired twins out of Shirley, Daisy, and Bruna for 2012/2013.  Drover is taking after his dam, Millie, with his luxurient, phaeomelanin-rich white fleece! 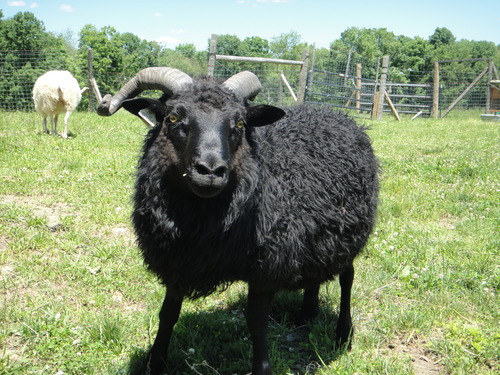 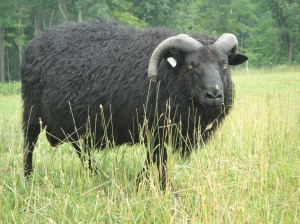 Boomer is by Monty (3/4 AI) out of Bindi (a 7/8 AI stock ewe.)
Boomer is our black sheep puppy dog of the flock.  We never predicted his sweetness when, within hours of being born, he was headbutting any hand that was placed in front of him!  His perkiness and bouncy character as a lamb landed him his name.  Boomer is a slang word for “kangaroo” in Oz.
Boomer is black, which means he is either homozygous or heterozygous for this dominant color. He has phenotypically heterozygous horns for the polled gene – not the prettiest set of horns, but he makes up for this in his personality and the personality of his offspring.
He sired an 11 pound, gorgeous, fast growing solid grey ewe with Molly in the 2011/2012 breeding season.  He’s developing a beautiful, shiny black coat of wool for the Fall shearing.  Boomer carries genetics for moorit and spotting.  He sired several nice lambs for us in 2012/2013.